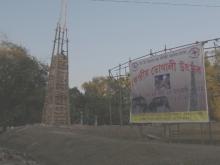 7 Sep 2015 - 5:27pm | Subhamoy Bhattacharjee
Physical demarcation of the Kalapahar-Daigurung elephant corridor in Karbi Anglong district got a formal boost after a foundation stone was erected at a ceremony organised by Wildlife Trust of India...