Its sounds strange. But the people are least bothered. Sixty six years have passed since India gained independence. During this six and a half decades, the country progressed on many fronts. But the independence seems to have failed to address the millions of poor lots. They are still remaining starved and half starved.

The government statistics claimed to have made notable progress in alleviating poverty, sharp increase in GDP and what not. But the real picture brings out the grim reality which does not allow those people in power to escape the responsibility. Take the example of Assam. The state has still 101.27 lakh people languishing in dire penury. According to the planning commission’s poverty estimate, the oil and tea rich state has the 12-th highest number of people in the country. The survey conducted in 2011-2012 reveals that Assam’s BPL population is 31.98 per cent. The figure is said to be better compared to 2009-2010 when the number of BPL people in the state was 116.4 lakh. Assam has 92.06 lakh people in the rural areas while 9.21 lakh people hail from urban areas.

But there is no dearth of schemes to uplift these people in poverty. If it so happens, then  why these figures have left the state disappointed. It suggests failure of the government to properly implement these schemes. If agriculture is the backbone of the state’s economy, then the performance on this front is deplorable. The widespread practice of traditional farming techniques is yet to be replaced. The much-hyped schemes have yet to reach the farmers in the state where agriculture is staple means of livelihood for 75 per cent people, where 69 percent of workforce is concentrated on cultivation.

Why only an area 27.24 lakh hectares are allowed for cultivation out of gross 39.83 lakh hectares area even after the existence of a heavily manned agriculture department? There is hardly any mechanism to promote the sector. The cultivators are in the crying need for funds to boost production. But of no avail. They grow rice, fruits and vegetables. But only to reach the buyers through the middlemen. Thus they are deprived of their benefits. The government speaks of schemes to bring boomtime in this sector to tide over a particular period of stress and strain. But even after a temporary relief, the announcement and initiatives remain in file.

Industry is the second largest sector that can boost the economy. But the progress is at a snail’s pace. Barring the oil and gas PSUs, others are battling for life in the absence of proper care and attention. Take the example of jute mills, textile ad yarn mills, silk mill-----facing closure because of infrascture bottleneck and utter mismanagement practice.

If agriculture and industry sectors are vital for economy, then how Assam will see the light of a healthy state. Will this ailing sector help the state alleviate poverty riding piggyback on a booming economy? 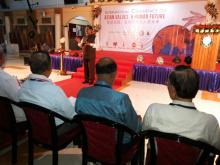