Crucial document relating to transaction of several crores along dozens personal computers have been ravaged when   the Dispur branch of Canara Bank caught fire on Sunday.            The fire broke out at 2pm and fire tenderpr arrived in the spot as soon as the smoke  were seen bellowing from the first floor of the bank beside the Ganesguri flyover.            Initial report suggested that the fire broke out due to electric short circuit which completely ravaged the fist floor.          Talking to assamtimes, the bank officials said that the lockers in the second floor was intact.        It took thee hours for 5 fire tenders to bring the situation under control.

11 Dec 2018 - 10:01am | AT News Guwahati
Guwahati: The city based scribes maintain good health as most of them have performed well in a recent blood screening camp conducted by Assam’s celebrated healthcare institute Dispur Hospitals.... 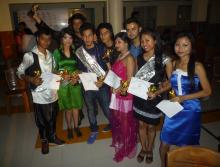