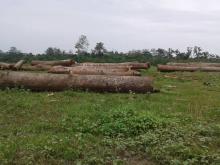 21 Nov 2017 - 9:25am | Maksam Tayeng
A stepped up felling of trees in  the reserved forest areas in Arunachal Pradesh seems to posed a huge threat to the ecological health of the north eastern state forcing the authorities to...

13 May 2017 - 7:40pm | AT Kokrajhar Bureau
One person died and four others received serious injuries due to road mishap at Labrabati Patgaon in Kokrajhar district on Saturday. According to police, an Eon vehicle  bound for Siliguri from...