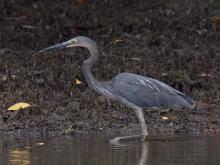 29 Oct 2016 - 7:57pm | Chandan Kumar Duarah
After the Pink-headed Duck and the King Vulture, the magnifient White-bellied Heron (WBH) in Assam is all set to go the Dodo way. The absence or disappearance of the White bellied Heron is a matter...