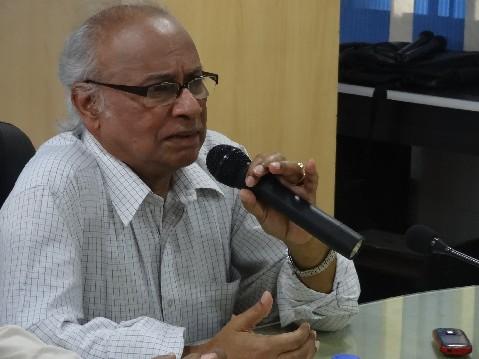 Prof. Asis Dutta, Padma Bhushan awardee, eminent scientist and former Vice Chancellor of Jawaharlal Nehru University, Delhi, appeals the upcoming generation from Northest to work towards the development of agriculture and farm products, to see their state at the 'zenith'.

An expert in Genetic Engineering and Biotechnology, Prof. Dutta visited the campus of University of Science and Technology, Meghalaya (USTM) at 9th mile on Tuesdayafternoon and interacted with the students, scholars and faculty members of the University and said, “what really matters at the end of the day is your contribution to the society. And Northeast being very fertile area, one can contribute in its growth by bringing in new techniques in its agricultural sector,”.

“Science is a journey not a destination. The road to success is always…under construction” said, Prof. Asis Dutta, adding “Science means the triumph of human mind over matter, there are therefore no limits to the excellence to which human mind can develop. The quest for excellence is the driving force of human societies and civilizations as much as it is for human individuals and institutions”. He also encouraged the students to take an interests towards Genetically Modified (GM) crops, so that they can feed not only their countrymen but people all over.

Prof. Dutta added, “the world population will increase to 10 billion by 2050 which will lead to increase in food demand up to1.7 times by 2050. At the same time there will a drastic decline in cultivable land to less than 0.15 hectares per capita. This will lead to crop loss draught, salinity,disease and post-harvest losses. At that time Genetically Modified crops will be the only answer”.

The Life time achievement award, Biotech Research Society (2011) added that science and technology add value to society only if they are part of a “national innovation system” and said that all must “Dream to bring Science to Society”.

Along with Prof. Dutta, Dr. P.K.Seth, CEO, Biotechnology Park, Govt. of U.P., Lucknow and Former Director, Industrial Toxicology Research Centre, Lucknow also visited the University campus and interacted with the students, scholars and faculty members. Prof. Seth is a biochemical pharmacologist and toxicologist who has made pioneering contributions to the field of Neurotoxicology. 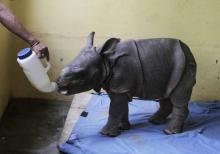 4 Aug 2016 - 6:13pm | AT News
In a rare move that draws huge applause for AJYCP, the organization is evincing keen interest to adopt one of the hapless rhino calf in Kaziranga National Park.Talking to Assam Times in Guwahati on...