'Aawaz - speak up against sexual violence' is the brainchild of a bunch of music aficionados from Bangalore with a voice.

It all began during the winter of 2012, when a young woman was raped and brutalized by a gang of men inside a moving bus in Delhi. An enraged came out on the streets, screaming and demanding for justice. This public outcry was reported widely in the media, which led to the speedy arrests of the culprits. Unfortunately, spot fixing scams and incompetent politicos have taken over national media again, and the pressure building around the Delhi Gang Rape case has lapsed into silence. But the team behind Aawaz realized from the episode that change can indeed be brought about when a collective voice is raised. The idea to work on a music project to create awareness around gender inequality and sex crimes came from the understanding that music has the power to get the message across where plain words fail.

There’s a faint notion about the privileged Indians that they are indifferent towards the woes of their less fortunate counterparts. There’s another notion that the public memory is short lived. It is at this point of time the Aawaz team figured the need of the hour is to remind law enforcers and media that public memory is not so short-lived. Thus the Aawaz dream became a concrete project, with a bunch of youngsters selflessly chipping in time, effort and money to generate awareness around the issues that women in our country face every day.

The project has been spearheaded by Jim Ankan Deka, an Assamese musician and director of Eastern Fare Music Foundation, a music organization based in Bangalore. People from across India contributed to this project including Queen Hazarika, noted singer from Assam, Antara Nandy, 14 year old vocalist and finalist of Sa Re Ga Ma Pa Little Champs 2009 from Kolkata and Ritwika Bhattacharya, a singer from Ranchi. Parmita Borah directed the music video. The song was recorded at Eastern Fare Studio and Madcat Music Studio in Bangalore and Sargam Audiocraft, Guwahati.

"Aawaz" strives to remind people of the horrific rape incident and the fact that the nation waits in anticipation, along with the family of the unfortunate young woman for justice; While Aawaz aims to retain the same public outcry so that we as a nation can pressurize the law enforcers to deliver justice and punish the guilty; the project also covers other aspects like child sexual abuse and marital rape, and attempts to generate awareness about these evils that plague our society. Aawaz is not just a music project; it’s a means to an end, a hope to inspire change, a dream to witness a safer today.

The video was released on June 29, 2013 is available worldwide through Youtube and the song is available on platforms like iTunes and Amazon.

24 Nov 2009 - 5:07pm | editor
Shreemoyee Asomiya Mahila Samiti (SAMS), Mumbai is organizing 'Zubeen Garg' nite at Navi Mumbai (Juinagar) on November 28. SAMS always works for the benefit of the society. Their aim is to help the... 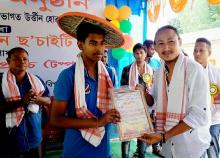