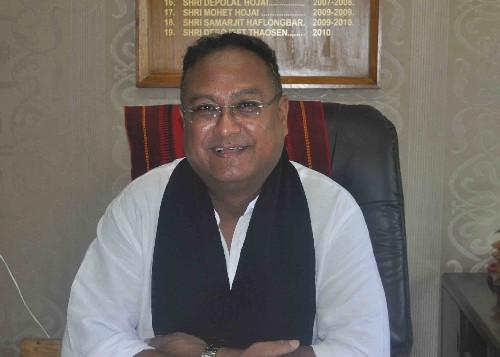 The Chairman received seven nominations which were found valid and were in favour of Sri Thaosen.

Attending the session, all the 26 MACs congratulated Sri Debojeet Thaosen on being elected as the Chief Executive Member North Cachar Hills Autonomous Council while hoping for a good governance under the leadership of Sri Thaosen.

Sri Mihir Gorlosa, MAC from Kalachand constituency said facilities for the opposition also needed to be provided with the modification and rectification of rules since a strong opposition is also very much required for good governance. He also said ‘how the opposition could survive in empty stomach’.

Sri Debojeet Thaosen, CEM, NCHAC said it was unfortunate because we were not having any opposition. A Healthy and constructive criticism always helps the government to do more welfare for the people as well as for the district. He requested all the members to put forward suggestions regarding the facility for the opposition in the session slated to be held on July 12 next.

Answering the questions of the media persons Sri Thaosen disclosed that the permanent solution to the payment of salaries to the employees of normal sector would be the top priority for his government. It is to mention here that the employees of normal sector were not getting salaries for last few months. New CEM said road communication, proper water supply at Haflong in particular and in Dima Hasao in general needed to be addressed in priority basis.

Mentionable that Sri Thaosen would be the CEM of 11th NCHAC for the 2nd term. He was the CEM of 10th North Cachar Hills Autonomous Council for 2 years and 11 months.