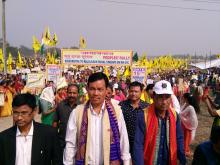 16 Feb 2018 - 11:13am | AT News
Kokrajhar: People thronged in thousands in at Kashikotra in Chirang district on Thursday reviving the separate Bodoland demand. The speakers at the huge gathering reiterated the demand to...

19 Feb 2015 - 10:43am | Prasanta Baruah
Assam BJP unit is heading for a vertical split a year before the assembly polls.Party top leaders refusing to be named told Assam Times that the crack is imminent after the party leadership has...