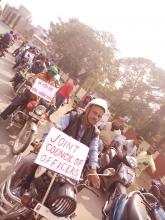 Bike rally for another BVFCL unit

19 Jan 2018 - 12:13pm | AT News
NAMRUP: Hundreds of bikers took out a huge rally in Namrup on Friday mounting more pressure on the government to expedite the proposed fourth unit of the Brahmaputra Valley Fertilizer Corporation....