16 Dec 2015 - 7:19pm | Dibya J Borthakur
Hundreds of students of Raha college appearing for the BA fifth semester honors examinations under Guwahati University that commenced on Tuesday faced inconvenience at the examination hall as the... 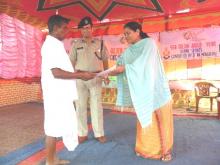 12 Jan 2015 - 5:37am | Hantigiri Narzary
The Bodoland Peoples Front(BPF) party alleged political conspiracy behind the December 23 carnage by NDFB(S) to monger trouble among the Bodos and non Bodos in the run up to the BTC polls.BPF...