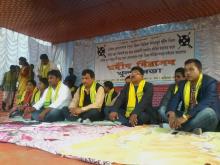 20 Mar 2008 - 12:31pm | editor
Forty people have been injured while a Dergaon-Jorhat bus fell into a deep gorge before it reached the destination. According to information, the incident that left ten people seriously injured took...

One more Rhino dies at Kaziranga, this time due to floods

3 Aug 2007 - 5:46am | editor
Kaziranga : One rhino was drowned at Kohora Range in Kaziranga National Park. This is the first reported death of any big animal in the park after floods submerged more then 60% of the park area....