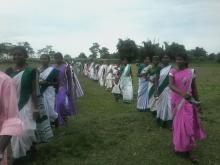 13 Sep 2016 - 9:35am | AT Kokrajhar Bureau
The Adivasi community offered their worship to the almighty Shiva god on the occasion of Adivasi Karam festival at Karigaon Dhanpur ground in Kokrajhar district on Monday. It was organized by Raji...