1 Oct 2015 - 9:59am | AT News Itanagar
The Arunachal Pradesh government will file a review petition in the Supreme Court against permanent settlement of Chakmas and Hajongs in the state. The state Cabinet which met on Wednesday decided to... 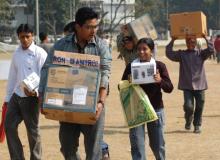 28 Sep 2008 - 8:46pm | Nanda Kirati Dewan
With technology taking grip of the globe and for global exposure of the guild Guwahati Artist Guild (GAG)- one of the oldest association of artists that was initiated in the year 1976 has officially...