BJP on Sunday blamed Congress for the lack of development in Assam. Addressing a press conference in Guwahati on, party president Nitin Gadkari lambasted it for failing to live up to the expectations of the people in Assam despite being in power for 11 years.

He said that the wrong economic policies and corruption of the Congress government are simply responsible for the current state of affairs in Assam and the north east. Assam in the first state in the country where power generation has fallen over the years, he maintained. BJP has prepared 'vision documents' for development of Assam and the other north eastern states. 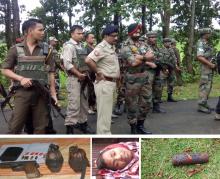