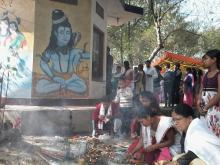 17 Feb 2015 - 1:00pm | Suvansu Bora
Golaghat wears a festive look as Shivrati celebration is going on in full swing.Devotees in large numbers are thronging the Shiva temples to offer pujas to the Lord from early in the morning.Historic...