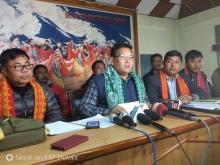 16 Jan 2019 - 5:55pm | AT Kokrajhar Bureau
The All Bodo Students Union (ABSU) has affirmed that strong mass movement will continue until and unless Bodoland statehood is achieved under Article  2 & 3 of the constitution for the...