1 Jan 2012 - 1:23am | editor
A citizens meeting at Guwahati Press Club yesterday expressed serious concern at the increasing rate of killing of tigers in various parts of Assam and urges the State government to activate the... 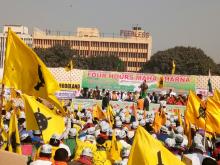 28 Nov 2017 - 2:52pm | AT News
NEW DELHI:Hundreds of people from three organizations from BTAD areas have staged dharna in Delhi on Tuesday reviving the Bodoland demand. With banners, festoons and play cards, the ABSU, NDFB-P and...