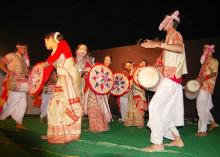 18 Apr 2008 - 5:12am | editor
It was 13th April, 2008, a hot sunny April afternoon. In spite of that, as soon as the evening approached, people from Assam as well as the well-wishers of Assam, currently staying in the millennium...

29 Jun 2008 - 2:50am | Nava Thakuria
Media is allowed to publish a fair and accurate report of a judicial proceeding. Even the media persons can make a fair comment on the merits of a case. These facts appeared in a conversation among...