Utter sensation prevails in Guwahati after local residents of Kamakhya found a severed head on Friday.

According to police, it could be a case of human sacrifice. The head was found in a plastic bag along with a sheet of paper of a hymn written on it.

The head was not identified. It is suspected that the person was beheaded and the severed head was brought near the ancient temple. Investigation was going on. 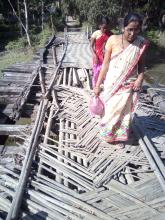