14 May 2015 - 5:44am | AT News
Yet another vital clue on rampant rhino poaching in Kaziranga surfaces when police interrogated three poachers after being captured in Jorhat on Wednesday. Policemen tracing the development told... 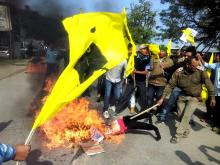 7 Apr 2016 - 11:40am | Lester Makang
On April 1 and 2, the typically cold and dark Ukhrul nights with cloudy drizzling skies, came alive for a worthy reason. Those were the glamorous nights when the red carpet premiere show -- a first...