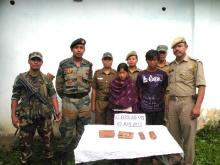 5 Jun 2013 - 9:21pm | Ripunjoy Das
In a well planned joint operation by the 1 Assam Rifles and Arunachal Pradesh Police one NSCN (K) cadre was arrested from Khonsa town, the district headquarters of Tirap district on Monday while two...

4 Jan 2015 - 8:24pm | Hantigiri Narzary
The All Bodo Artistes’ Association(ABAA) has rescheduled its 7th annual conference on February 7 and 8 next instead of January 10 and 11 citing the recent carnage in the district. BTC chief Hagrama...