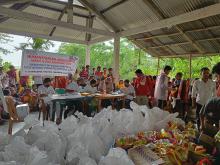 25 Jun 2022 - 9:40am | AT News
The unprecedented early floods in the state of Assam have affected more than 5 million people. Following a Rapid Need Assessment (RNA) in the district of Nagaon, NEADS has activated its humanitarian...