Woman Burnt to Death over Dowry at Dhupdhara, 4 arrested.

A 28 years old woman on Saturday, July 16 died after her in-laws allegedly set her on fire over dowry demands. The incident took place at a village nearby Dhupdhara in Goalpara district. According to a police complaint filed by the father of the victim, identified as Ruby Choudhury, she was set on fire on July 8 by her husband and in-laws over dowry demands. With 90 percent burn, she was rushed to a Guwahati hospital by her neighbours where after nine days she succumbed to her injuries on Saturday last. Ruby, hailing from Sarthebari in Barpeta district, had got married four years ago with Jitumoni Choudhury of Khekapara village near Dhupdhara and since then she was being harassed for dowry by her in-laws.Ruby's father, Ghanashyam Bhuyan, informed Dhupdhara police about the dowry dispute and police have registered a case against the victim's husband, Jitumoni Choudhury, in-laws Dipnarayan Choudhury, Binadutta Choudhury and Rita Choudhury (Jitumoni’s sister). Police arrested all the four members and sent to Goalpara jail. Meanwhile, after arriving the body of Ruby at Khekapara on Saturday night, the angry family members of Ruby along with some local villagers cremated her body at the premises of her husband's house. They also damaged the house and properties. 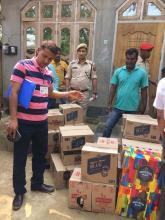