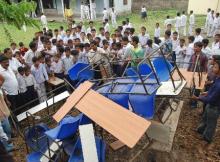 Gogoi hits back at Modi

10 Feb 2014 - 1:37pm | AT News
Chief Minister Tarun Gogoi on Monday claimed to have done more than Narendra Modi two days after his Gujarat counterpart took on him at a huge rally in Guwahati.Addressing a press conference in...