Some very exciting creations by short film makers from across the world will be showcased in the 1st Guwahati International Short Film Festival (GISFF) to be held on May 2nd and 3rd, 2011 at Assam State Museum Auditorium, Guwahati.

Altogether 200 films from countries like Spain, Italy, United Kingdom, Netherlands, USA and Australia as well as all over India will be screened during the festival under sections like World Kaleidoscope, Indian Kaleidoscope and the competitive section, North-East Shorts.

The festival is an initiative by Creovaent Productions in association with Shamiana, the acclaimed short film club from Mumbai.

The jury that will judge the films in competition will be headed by eminent filmmaker Shyamaprasad from Kerala (director of award-winning Malayalam box office hits like Agnisakshi, Ore Kadal and Elektra). The special screening of critically acclaimed film ‘Kerala Café’ by Shyamaprasad will also be screened during the two day festival.

The other jury members will be Assamese actor Adil Hussain (who is acting in Ang Lee’s ‘Life of Pi’, Sridhar Raghavan’s ‘Agent Vinod’ and several other important films in various languages, after having received acclaim in films like 'Gangor' by Italian director Italo Spinelli, 'For Real' by Sona Jain and 'Ishqiya' by Abhishek Choubey), this year’s Aravindan Puraskaram winning director Nila Madhab Panda (whose feature debut ‘I Am Kalam’ has won 11 international awards till now) and internationally-acclaimed Manipuri filmmaker Haobam Paban Kumar (whose documentaries ‘AFSPA’ and ‘Mr India’ have earned global acclaim).

The films in competition are:

The festival will have a special tribute to young filmmaker Anghsuman Borkotoky by screening his film “Doctor, Nurse & Patient”, while another film by him Windows 4:3 will be in competition.

The prizes that will be given away in the competition section are for the Best Film, Best Director, Best Screenplay, Best Editing and Best Cinematography. The winners will be awarded with Golden and Silver Rhino along with certificates.

"The GISFF is an important initiative to create a platform to discuss, disseminate and in future market short fiction films, a genre that is finding more and more popularity all over the world in recent times. Young Assamese film entrepreneur Prithish Chakraborty of Creovaent Productions has developed the concept of the festival and I am sure in the coming years it will emerge as an important and exciting event in the film festival calendar of India," GISFF director and National Award-winning film critic Utpal Borpujari said. 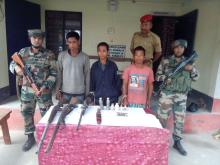