Anti-corruption campaigner Akhil Gogoi along with some 40 members and supporters was at that time about to proceed to Dighali Pukhuri to lead a democratic sit in protest in support of Gandhian Anna Hazare’s demand for the ratification of Jan LokPal (Ombudsman) Bill for the second consecutive day since Saturday after calling short a Press Meet on non industrialization of Lower Assam at Guwahati Press Club when the incident took place.

Akhil Gogoi who for about more than a year now has been spear heading mass corruption awareness among all sections of the social strata was told by the Deputy Commissioner Guwahati Metro at Pan Bazaar Police Station that he was only detained under section 107 IPC and not under PR Act 126 as earlier stated. A number of citizens including senior citizens collected at the Pan Bazaar Police in support of Akhil Gogoi’s apolitical and evidently democratic stand and demanded that Akhil Gogoi be freed unconditionally.

At the Pan Bazaar Police Station Akhil Gogoi and members resorted to indefinite fast when the Deputy Commissioner Kamrup Metro arrived to take stock of the prevailing situation. Akhil inquired into his dramatic detention and demanded that the Administration concerned tender an apology to the agitated gathering for forcefully hindering a democratic exercise from being carried on. The Deputy Commissioner present however expressed his dissatisfaction over Akhil’s arrest and assured his release under a PR Bond by 4pm.

Akhil mounted atop a vehicle and addressed a sea of people moments after his eventual release sensitizing them about alleged corrupt ministers and large scale misappropriation of funds. “We will stand against corruption; we may be arrested but not killed, we shall not surrender”, he said. He blatantly accused the Tarun Gogoi led Government and Ministers Himanta Biswa Sarma and Rockybul Hussain of unemployment and other misdevelopments in the state. Nothing can be better than democratically agitating to bring in the Jan LokPal Bill to find a corruption free Assam said a young Arup Kalita who joined the bandwagon supporting Anna Hazare and Akhil Gogoi at Pan Bazaar.

A series of protests took place at many places in the state after news about Akhil’s arrest broke out. Effigies of Tarun Gogoi were burnt and anti-Congress slogans chorused. Later after his historic public address Akhil led a procession with increasing supporters to Chandmari where he again addressed a mass gathering at the T point standing atop the concrete height otherwise used by the Traffic Police to divert and manage the traffic. All vehicle commuters and passersby stood still and lended an eager ear to him as he requested them to boycott the Congress (I) in the proceeding second phase of the State Assembly Elections on Monday.

The KMSSA on Saturday launched an indefinite sit in protest at Dispur Last Gate Grounds to acknowledge and uphold Anna Hazare’s fast-unto-death effort for an India sans corruption. Later towards evening the venue of the sit in protest was DighaliPukhurir Par where multitudes of people convened. Organizations like Save Guwahati Build Guwahati, the Policy Group for Peoples’ Rights of Dibrugarh, Chaliha Nagar and Bordoloi Nagar Citizen’s Fora, the Senior Citizen’s Forum of Tinsukia and a number of people including the youth and women took to the streets to convey their solidarity followed by a candle-lit march.

The KMSSA in its publication titled “Why is it necessary for the public to reject the Congress?” accused the Congress Government for the unavailability of posts and appointments in all Government Departments , non Provincialization of Schools, lack of PSUs, unexpected price hike, destruction of a people by the Construction of Dams, hike in Transportation Fare, a crippled Education Sector, hike in Education Fee, hike in the price of Life Saving Drugs, hike in Government Hospital Fee, hike in the cost of weaving threads and the devastation of the Weaving Industry, failure to employ the unemployed, increase in crime rates, a corrupt Public Distribution System, misappropriation of NREGA funds, mass corruption, 100 Core scam in North Cachar Hills District, increase in Energy Fee, hike in essential commodities, disappearance of Water Fronts to concretization, non enactment of the Forest Resources Act, misuse of Land, improper Industrialization, an eroding Veterinary Department, neglect of indigenous crops and acceptance of hybrid varieties, no Erosion proof schemes, non protection of the Majuli Island, closure of Cinema Halls, non Declaration of New Government Pension Schemes, misappropriation of funds by the Irrigation Department, non implementation of the Assam Accord and non completion of the pilot National Register of Citizens, non tribalization of the 6 indigenous communities and gross misuse of power are amongst the 50 Big Allegations leveled against the Congress Government. 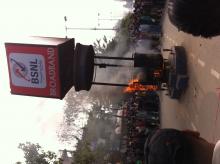 10 May 2012 - 1:26am | editor
The Centre on Wednesday claimed to have given a big blow to Maoists trying to set up bases in Assam. Hours after the encounter at Sadiya, Union home secretary RK Singh told reporters in Delhi that...

13 Oct 2015 - 9:30pm | AT News Itanagar
Arunachal Pradesh Chief Secretary Ramesh Negi asked the authorities to expedite the formalities for early implementation of a huge power project in the state. In a video conference on Tuesday...