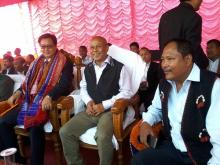 10 Feb 2015 - 9:25am | Hantigiri Narzary
The BTC administration is celebrating today 13th Bodoland day at BTC secretariat ground to mark the historic Bodo Accord that was signed in a tripartite peace talk centre, state and the then BT...