Security forces on Saturday arrested an NDFB cadre suspected to have been involved in the July 8 blast which caused the derailing of the Kolkata-bound Garib Rath Express was arrested in Assam’s Chirang district. Sources say patrolling troops of the 15 Dogra Regiment acting on a tip off apprehended the militant identified as Edward Shrampani. Suspected NDFB militants planted the powerful bomb on the railway tracks at Gossaigaon, killing a child and injuring 13 other passengers of the Garib Rath Express. 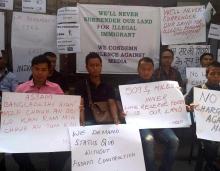 21 Feb 2014 - 2:44pm | AT News
Amid simmering crisis, the Asom Gana Parishad held its executive committee meeting on Friday in Guwahati to discuss the Lok Sabha poll.Presided over by Prafulla Kumar Mahanta, the failed to arrive at...

25 Dec 2017 - 11:50am | AT News
GUWAHATI: A huge public convention in Guwahati is set to intensify an agitation demanding immediate release of Akhil Gogoi whom the police in Golapara arrested after the High Court set aside his...