The culture loving people of Nagaon defied all the chilly night when they gathered to watch famous “Hengul Theatre” inaugural show on 17th Jan evening at local Khelpakhar field. The three days show from 17-19 Jan’10 is slated to enact Ahijit Bhaatachajee’s play ‘Kaal” and ‘Jhankaar’ with another play by Munin Baruah . The show is organized in association with ‘Shankardev Sanghathan’ Nagaon chapter, Namghar to help in raising fund for new school. As the first day of the show coincide with “Shilpi Diwas” , the initial one hour was dedicated to light music section before enacting of ‘Kaal’.

The star-stud show was lead by cine artists Prashat-Shamantika Sharma with touch of real and reel cinema too. But, though the organizer has hard time in changing its actual venue from Nehru Bali field to here due to ongoing ‘Bhogali Bihu’ function being celebrated over there, the common spectator has to suffer much from post to pillar to get proper seat to watch it despite paying the money for ticket. Actually, the arrangements made by ‘Shankardev Sangathan’ were so busy with pass holder patrons that the ticket holders were having difficulty even after starting of the show.

The professional attitude of “Hengul Teatre” needs to show its commitment beyond stage level to show that experience of common man really worthy for the money he is going to pay and pain he is taking for its love of Assamese theatre.

10 Apr 2020 - 10:13am | AT News
GUWAHATI: A huge hailstorm accompanied by thunder and lightening on Thursday night heavily disrupted normal lives in many parts of the state on Friday. The storm started lashing the capital city... 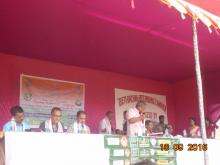 21 Sep 2016 - 4:56pm | Jayanta Kumar Das
An  awareness campaign was organized by the Directorate of Field Publicity under the Ministry of Information and Broadcasting of Government of India in association with the Live Green,a nature...

In deep grip of Christmas festivity

24 Dec 2017 - 11:09am | AT News
GUWAHATI: Christmas festivity grips the Assam with brisk preparation a couple of hours before the evening in the nook and corner of the north eastern state. Churches across the state are getting...