Popularly known as blood painter amongst the natives, Gautam Bardhan who has been drawing 97 sketches and pictures till date by using own blood on different occasions was awarded prestigious 'Avantika Rastriya Sadbhawana Samman at Hindi Bhawan, Bishnu Digambar Marg, Delhi on October 9, 2009. The award was presented to him by the 'Avantika' a group of contemporary artists and intellectuals, in a function in presence of President of India, Padmashree G P Chopra, Kapil Sibal, Union Minister of Human Resources, and many other dignitaries. It should be mentioned here that Bardhan is the principal of Priya Sava Art College, South Hill Colony, Lumding in Nagaon district.

3 Mar 2013 - 11:48pm | AT News
Much to the utter disappointment of the nature lovers, the carcass of an elephant calf was found in Hollongapar Gibbon Wildlife Sanctuary in Jorhat district on Sunday.The female elephant, suspected... 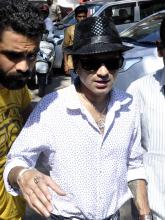 6 Oct 2017 - 3:04pm | AT News
A lower court in Guwahati on Thursday jailed Zubeen Garg for slapping a young boy in the city four years back.  The Guwahati session court cleared the judgment when after hearing both...

7 Aug 2007 - 7:14am | editor
JBF (INDIA) is a professionally managed registered (as trust) animal welfare organization. It is promoted by JBF (Scotland), a Scottish charity. JBF (INDIA) is also the member society of World...