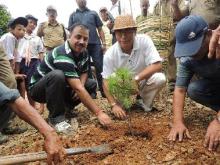 25 Aug 2019 - 10:46am | AT News
This is an invitation for papers. Concept Note of the Seminar Role of Religion in Peace and Conflict Processes in Northeast India Organiser: North Eastern Social Research centre, Guwahati 15th...

1 Apr 2014 - 3:15pm | AT News
Finally, Tezpur police have registered a case against Dr Himanta Biswa Sarma acting on the complaint of making communal statement in a recent poll rally.The case bearing No 266/14 has been registered...