BJP workers of Darrang and Udalguri districts have expressed serious concern at the inactiveness of BJP candidate and state BJP president Ramen Deka. Hundreds of dissatisfied party workers headed by Jiten Kalita, president Udalguri District BJP Yuba Morcha, have resigned from the party to join BPF. They alleged that Ramen Deka could hardly find time to meet party officials. Common voters were out of question. In a press release Jiten Kalita said that they were against the candidature of Ramen Deka from the beginning, as he had never been aware of the problems of Darrang and Udalguri. Another allegation against Ramen Deka is that state BJP officials including Ramen Deka had never taken Udalguri BJP Yuba Morcha into confidence. The rebel BJP youth officials said that it would have been better to offer Mangaldai HPC to AGP, which at least had a better ground base in Darrang and Udalguri. The joining of BJP workers has encouraged BPF to a great extent. On the other hand the moral of the BJP has fallen both in Darrang and Udalguri.

In another development, Rava People Protection Forum (RPPF) of BTAD has declared their support to BPF. In a press release dated April 13th, chief convenor of RPPF, Dandi Rava said that in the greater interest of the Rava people living in BTAD, the forum had decided to offer unconditional support to BPF candidate Dina Nath Das in the 8th Mangaldai HPC. With the joining of district level BJP workers and support from RPPF, BPF has gained much needed momentum in the election campaign and a straight contest is likely to be witnessed between Dina Nath Das of BPF and Madhab Rajbangshi of Congress. 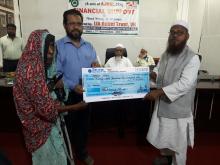