The scenario of cinema in Assam remained stagnant, if not deteriorated, in the year 2008. And it was in spite of some finest efforts and fantastic achievements that was unprecedented in the history of cinema in the state.

On the very first hand, it is very disheartening to know that in a country which boast of producing the highest number of films in the world to have onmly three films throughout the year in one of its prominent languages. But most disheartening is that non of the films are commercially successful. Ajan Fakir Saheb and Mon Jai, two films which demonstrated certain cinematic quality, just came to the theatre and went away. On the other hand, Dhan Kuberar Dhan, only film to experience commercial success to some extent, was not committed adequately to the grammar of filmmaking. Two other films, Aideu and Aai Kot Nai was not released in the theatre.

But the year can be said to be opened in a hopeful note, with Aideu begging the Rajat Kamal Award for Best Film in a Regional Language and noted film critic Utpal Dutta also begging one for Best Film Critic. That Aideu was not released on commercial basis after such an tremendous achievement was both surprising and disheartening. Utpal Dutta, however, complimented his achievement with his fourth endevour in film criticism, 24 Frames.

It was just the beginning. There were more bonanzas, particularly for the film fraternity. On the very first hand, the Act for mini cinema halls has been passed, which will now allow interested persons to build mini cinema halls without the harrasement of red-tapeism. Moreover, according to this act government will waive the entertainment fee for these halls as well as multiplexes for a period of five years. To add to this, the National Film Archive of India (NFAI) also announced to start construction of the proposed film archive in the city.

Then there was the Short Term Film Appreciation Course organised by NFAI in association with Film and Television Institute of India (FTII) and Assam State Film (Finance & Development) Corporation Ltd. from September22- September28 in line with the Summer Film Appreciation Course held in Bangaluroo every year which, the Director of NFAI promised, set to be an annual event. The course was a success with about 100 participants taking part. The International Film Festival also organised by Assam State Film (Finance & Development) Corporation Ltd. from October17- October19 was also successful event, which screened some quality short features as well as animation films from all over the world. ADDA's annual endevour, which comprise 35 short films, has been able to maintain its reputation providing audiences with good taste.

From the distributor's point of view, the market this year is not so bad. From Taare Zameen Par at the beginning of the year, Jaane Tu... Ya Jaane Naa at mid and Rab Ne Bana Di Jodi at the year end, these films considerably good business at the state. While mediocre films like Singh Is Kking, Dostana and Ghajini did some excellent business, some good films like A Wednesday or Welcome to Sajjanpur failed to create a niche for themselves in the state.

Even the actors who are regarded as the backbone of the industy are doing well and fine, with mobile theatres proves to be their happy hunting ground. Being contracted for lakhs of rupees, these stars are indifferent to the struggling industry.

At the receiving end are the directors and the technicians. It is reported that many complete scripts are lying inert because of the non- availability of the actors. Even director like Sivaprasad Borthakur hasn't been able to take his film to the floor even after completing the paper works. Director like Munin Baruah is away from the scene since long. The video CD's are hammering the last nail to the coffin, with the directors and the other technicians are moving away from the medium.

3 Mar 2014 - 7:48pm | AT News
Over 50 people have been injured when police sprang upon them for staging demonstration near a function in Sivasagar district attended by chief minister Tarun Gogoi on Monday.The incident took place... 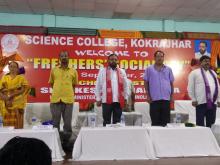