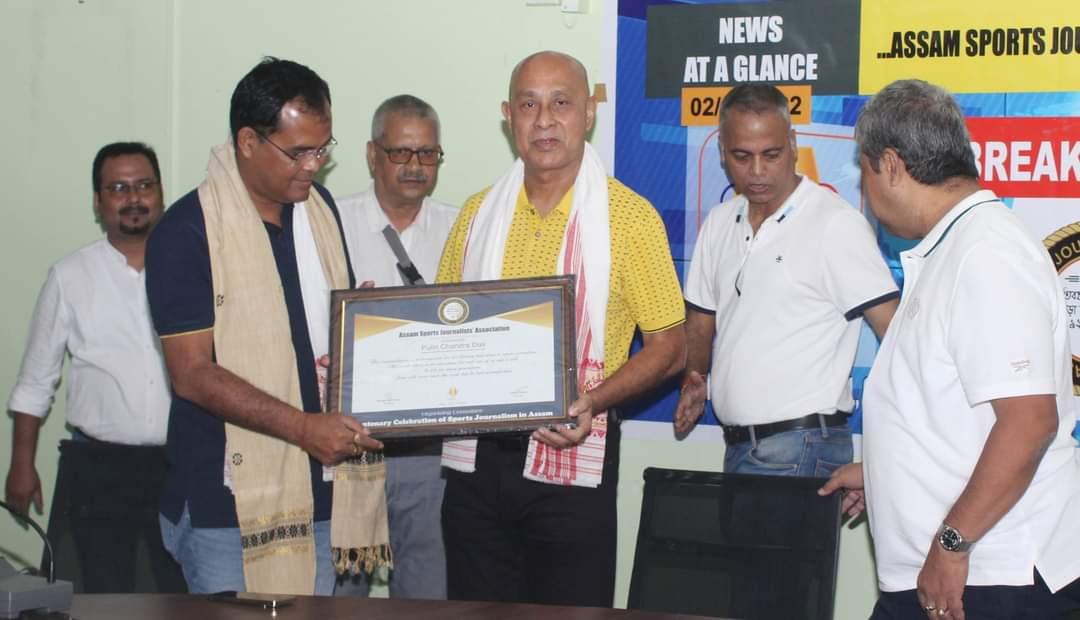 Guwahati: A year-long celebration of 100 years of sports journalism in Assam begins coinciding on the day while the first ever news related to a football competition is published in Asomiya (a weekly news magazine mentored by Chandra Kumar Agarwala) on 1  July 1923. Assam Sports Journalists Association (ASJA), which is affiliated with the Sports Journalists Federation of India (a national affiliate of the International Sports Press Association), has taken the lead in celebrating the occasion that will culminate on 1  July next year.

On Saturday, flags for ASJA and the centenary celebration were hoisted by ASJA’s founder president Balendra Mohan Chakraborty and his successor Pabitra Gogoi in the presence of senior sports organiser Rajib Prakash Baruah and other dignitaries  at the ASJA office premises under RG Baruah Sports Complex in the city. It was followed by a felicitation programme to the family members of some pioneer sports journalists.

Organised at the conference hall of Assam Olympic Association (AOA), the programme also witnessed the felicitation of many close relatives of deceased sports journalists for their invaluable contributions to the profession. The programme was graced by a number of prominent journalists, namely Dhirendra Nath Chakraborty, Premadhar Sarma, Pranay Bordoloi, PJ Baruah, Nava Thakuria,  Rahul Karmakar, Sanjiv Phukan and others.

Addressing the gathering, AOA general secretary Lakhya Konwar disclosed that sports journalists have played a major role in the sustained growth of sports in Assam over the decades. He expressed gratitude to the organisers for giving the State’s apex sports body an opportunity to walk hand in hand in the growth of sports. ASJA general secretary Imtiaz Ahmed informed me that the yearlong celebrations have been supported by ONGC, NRL, OIL, Topcem, ACA, AOA and other well-wishers.

“The celebration also coincides with World Sports Journalists’ Day that falls on 2 July. We will hold a mega inaugural ceremony to the yearlong celebrations on  9 July where some prominent sportspersons of India will be present,” said ASJA president Subodh Malla Baruah, adding that  publishing a book on the history of sports & related journalism and  building a memorial to mark the occasion are also on the card. ASJA Vice-President Bidyut Kalita informed that State chief minister Himanta Biswa Sarma and his predecessor Sarbananda Sonowal, presently a Union minister and  AOA president, have assured all possible support.