AASU all out against ASEB

29 Aug 2014 - 5:14pm | Dibya J Borthakur
The Raha unit of All Assam Students' Union ( AASU ) has expressed deep concern at the development centering round the transferring of all consumer relating official works of Raha ASEB office to...

27 Jun 2014 - 8:10pm | AT News
New Delhi reiterates its efforts to bring Anup Chetia back to boost the peace process with ULFA. During her visit to Dhaka, minister for external affairs Sushma Swaraj raised the issue with the... 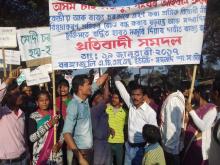 20 Jan 2017 - 11:55am | Robertson Tanti
Delhi and Dispur drew no less flak when thousands of tea garden workers hit the streets in Borengajuli, Attareekhat, Dimakuchi on Wednesday against demonetization and law labour policy alleging the...