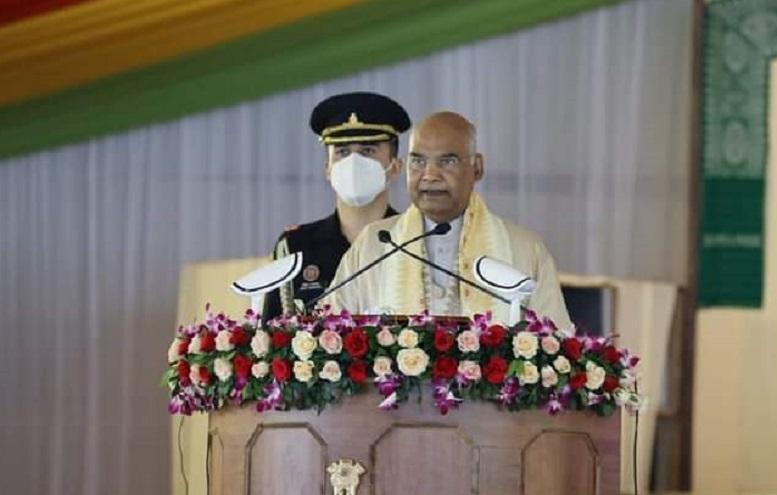 Tamulpur (BTR), Assam: After several years of violence, Bodoland and the Bodo people have accepted the principle of Bodofa Upendra Nath Brahma  'Live and Let Live’ to establish peace and progress for prosperity, observed Ram Nath Kovind, President of India at the 61st annual conference of Bodo Sahitya Sabha, Gwnjwng Pathar, Kachubari, Tamulpur, BTR Assam today. President Kovind congratulated the citizens of Tamulpur 35th district of Assam and hoped that it will prosper with community participation in its building and transformation process. He praised Bodo Sahitya Sabha for inviting delegates from Nepal, Bhutan and Bangladesh connecting Bodo speakers of the world under its leadership. He also appreciated its community connection, multiethnic cultural integration, literary knowledge sharing and education. The president praised the Bodo community for its patience for peace and hoped it would continue to strive until the community thrives. The President also launched a literary online platform of Bodo language .Bihung, engineered by Bodo Sahitya Sabha, for e-translation, literary and educational support that can be used as a dictionary.

"Women folk from the community and region should take leadership roles in socio-cultural, political, literary organizations to educate and empower generations’, said President of India, looking at the large number of womenfolk presence at the conference. The President graced the Open Session on the concluding day of the conference as the Chief Guest where Governor of Assam Prof. Jagdish Mukhi, Chief Minister of Assam Dr. Himanta Biswa Sarma, Chief Minister of Sikkim Prem Singh Tamang, and Chief Minister of Meghalaya Conrad K Sangma attended and addressed as Guest of Honour. Former president of  All Bodo Students Union (ABSU), Sahitya Akademi awardee and Cabinet Minister of Assam Urkhw Gwra Brahma, Speaker of Assam Legislative Assembly Biswajit Daimary, Rajya Sabha Member of Parliament from BTR Rwngwra Narzary, All Bodo Students Union (ABSU) president Dipen Boro were among the diginitaires present in the session presided by Bodo Sahitya Sabha president Toren Boro who presented the welcome address. The president recalled his parliamentarian days where he met Bodo MPs in Loksabha  Sansuma Khungur Bwisumuthiary in parliament who always  replied Jai Bodoland along with Jai Hind. President made a special mention of Sikkim Chief Minister Prem Singh Tamang, who chose to skip the speech and listen to President Kovind’s address to gain wisdom and largely benefit from his observations.

Chief Executive Member of Bodoland Territorial Region (BTR) Pramod Bodo in his opening remarks said Bodos had travelled a journey of forty years from violence to establishing peace and the gracious presence of the President of India is testimony to prevailing peace in Bodoland region. In his welcome address Toren Boro president BSS acknowledged the presence of the President of India and called it a historic session of BSS in its sixty year journey. ‘President of India’s presence is in itself is the biggest honour for the Bodo community and every Bodo is proud to have the first citizen of India in Bodoland that will surely inspire generations to dedicatedly work for culture, literature, community, society and nation at large." said Toren Boro. The Governor of Assam, Prof. Jagdish Mukhi, in his address recalled contributions of Bodos in the nation building process,  cultural and literary revolution of the community.

Chief Minister of Assam Dr. Himanta Biswa Sarma in his address announced 50 lakhs in Bodo populated district of Assam to build Bodo Sahitya Sabha offices in the next three years. He spoke at length about Bodo's cultural and literary integration with several communities in Assam and recalled the contributions of Bodo leaders in making modern Assam. CM Sarma said: "Bodos have shown that communities will survive if culture thrives, so Bodoland marched towards peace to attain prosperity from violence and resilience. Formation of BTR is the result of the peace process and the Government of Assam approved Bodo language as the Associate Official State Language of Assam. ’

CM also thanked the President for adjusting protocols and visiting Assam again in a short span of three months. He also informed Nitin Gadkari, Minister for Roads, Transport and Highways, Government of India had moved a proposal for construction of a 22kms elevated green corridor at Kaziranga National Park for animal safety passage during floods after President Kovind spoke to Gadkari. The President made this observation after his official stay at Kaziranga, Assam Police Guest House during his last visit to inaugurate celebration of four hundred years of Lachit Borphukan.

The 61st BSS session showcases the thriving culture of the community and its rich heritage and literature. The conference venue Gwjwn Fwthr in Tamulpur district of BTR Assam resonates with the sound of Bodo music alongside book exhibitions and multiethnic handloom museums promoted by Bodoland Handloom under the mission ‘My Handloom-My Pride’. President Kovind reaches Guwahati on four-day Northeast tour. Linguistically, the Bodos include a large group of people who are the speakers of the Tibeto-Burman speeches of the North and East Bengal, Assam and Burma. The Bodos or Boros of the Brahmaputra valley are known as Meches in Lower Assam, West Bengal and Nepal. Bodo Sahitya Sabha is the premier literary and intellectual parent organization of the Bodos of the world established in 1962.

The President of India is on a four day tour to North east India. Besides Bodo Sahitya Sabha, he addressed the valedictory function of the North East Festival organized by the Ministry of Development of the North Eastern Region (DoNER) as part of Azadi ki Amrit Mahotsav. The President will also grace the 16th convocation of Mizoram University as the Chief Guest in Mizoram’s capital in Aizwal on 5th May 2022.

22 Jul 2009 - 10:34am | editor
At least 132 persons were arrested for poaching 46 rhinos in Assam since 2006. This was what the government informed Lok Sabha on Wednesday. Replying to a written question, Environment Minister...