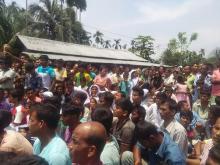 26 Apr 2018 - 10:46pm | Shajid Khan
TANGLA: The undying man elephant conflict has claimed yet another person in Udalguri along the  Indo-Bhutan border.Apart from unleashing a reign of terror, a herd of wild  jumbos ...