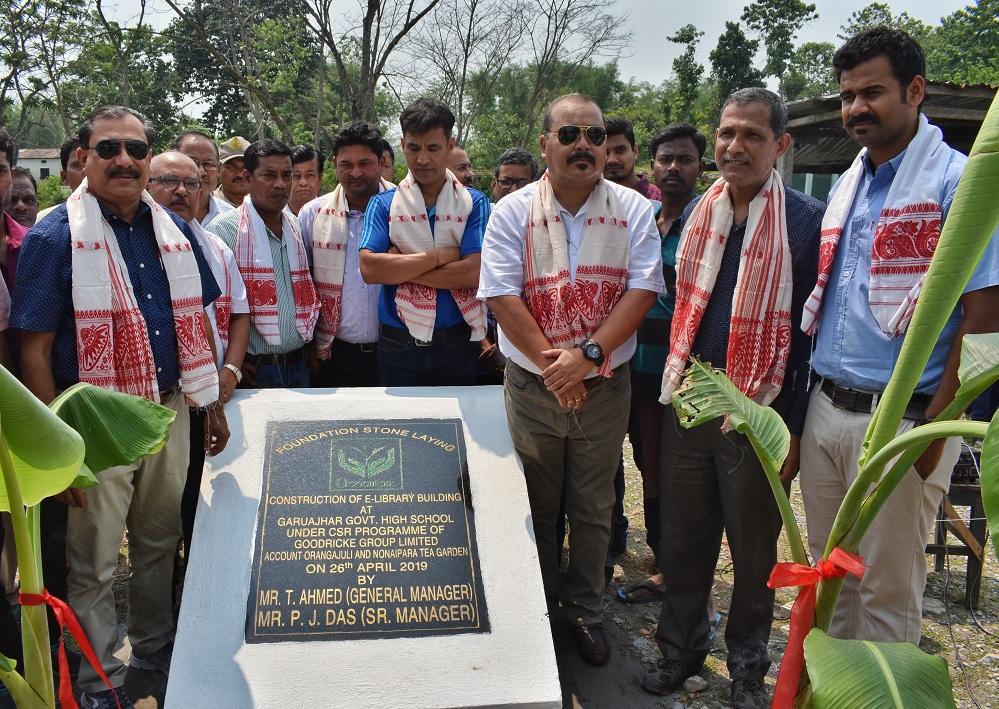 Tea Giant, Goodricke Group Limited operating Orangajuli and Nonaipara Tea gardens in the area under its Corporate Social Responsibility scheme has donated an e-library building to Garuajhar High School near Paneri in Udalguri district. The foundation stone of the same was jointly laid by General Manager and Sr. Manager of  Oranagjuli Tea garden,Talat Ahmed and P.J Das respectively at a ceremonious event held in the school premises on Friday.

A meeting to this effect was also held at the school premises where the teachers hailed the good will decision of the giant tea company. The teachers however lamemted the lack of adequate number of teaching staffs which has accounted for high teacher student ratio.Talking to mediapersons on the sideline of the programme, General Manager,Ahmed expressed his gratitude to Goodricke Group for granting the proposal of the e-library which will be completed within three montha at an estimated amount of ten lakhs .

He also reiterated the commitment of the tea company for bridging the gap and bringing in social upliftment specifically in education and literacy.The event was attended by host of tea garden managenent staffs of Orangajuli and Nonaipara Tea garden including Dy. Manager of Orangajuli,Indibor Gogoi;  Labour Welfare Officer,Orangajuli,Atanu Seal along with members of Assam Chah Mazdoor Sangha(ACMS),CITU,AASAA among others.

14 Feb 2011 - 12:42pm | Aiyushman Dutta
For a change, the voice of the Indian diaspora is now being heard, albeit without the expected, ubiquitous sitar and tabla. Mumbai-born and US-based musician Ameet Kamath recently released his...