14 Jul 2015 - 9:54pm | AT News
A businessman and his daughter died and two others sustained injury when suspected ULFA men sprang upon a family in Tinsukia district on Tuesday.The incident took place at around 7.30 in the evening... 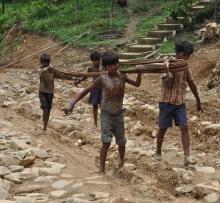 2 Aug 2011 - 3:45pm | Anup Biswas
Despite of all the steps taken by the legal machinery to eliminate Child labor like child labor laws, Child rights Act, it prevails and persists as a world phenomenon. One Nayak Infrastructure...