North Eastern Social Research Centre, Guwahati is organising a two-day National Seminar on “The Role of Women in Peace Processes.” The focus of the seminar is Northeast India but there will be a few presentations from the rest of the country.


Ms Teesta Setalvad, Secretary, Centre for Justice and Peace, Mumbai will give the keynote address. Prof. Ritu Dewan, former Director of the Department of Economics, Bombay University and former President, Indian Association of Women’s Studies will speak on the impact of the Kashmir Conflict on women. Neha Dixit, freelance journalist, New Delhi will speak on women and communal conflicts. Ms Amrita Gogoi of Dibrugarh University will speak on women’s role in the Nepal Maoist struggle.


The seminar attempts to analyse conflicts and peace processes in Northeast India (NEI). According to official sources NEI records the highest number of ethnic conflicts in South Asia. Recurrent efforts have been made to open a space for dialogue between the State and the militant groups or between the communities in conflict. The dialogue between the State and the militants has mostly resulted in partial and temporary respite. They have failed to address the structural dimensions of the conflict and to involve people from all social intersections. That has turned the dialogue into a discussion moving more towards power sharing and ceasefire than a lasting solution. Genuine peace should ideally be seen as a new society based on justice, not merely as absence of armed conflict. Peace to be real cannot be limited to power sharing between the State and the Militants but should result in a new space that includes the civil society, particularly women in the process. Women are by and large excluded from the dialogue with the State because it is limited to the militant groups, both of which are dominated by men.


While the official dialogue is mainly between men, the Northeast has many instances of women taking an active part in peace building as demonstrated, among others, by the Meira Paibis of Manipur through their protests near Kangla Fort against the Indian Army and State to revoke the draconian AFSPA in 2004. It is seen also in the social roots of the politics of Naga Mothers’ Association (NMA) derived from the role women played as ‘demi’ (mediators) in various Naga tribal traditions. One can add other traditions that entail a gender mainstreaming in conflict structures by recognising the positive agency of women that takes them beyond their cultural roles.


This conference will probe into the dual themes of the impact of conflicts on women, their roles, forms of intervention and capacities and limitations in peace building. By sharing the local experiences and traditional knowledge of communities appropriated by women to organise peace strategies, the participants will look into the processes of conflicts and peace in which they get involved. Studies indicate that women suffer more in times of conflict but they are excluded from the peace processes. A better understanding of this situation can assist men to become allies in the ‘gender sensitive interventions’ for peace building.


National seminar on the Role of Women in Peace Processes 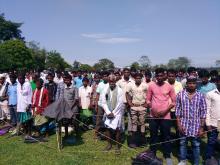 12 Apr 2018 - 3:02pm | AT News
Kokrajhar: Nearly 5000 Adivasi people thronged at Amguri in Kokrajhar on Wednesday raising their demands which include Scheduled Tribe (ST) status, land pattas.   With banner and placards, they...

Training on environment education for teachers

24 Feb 2013 - 11:16am | Dr M Firoz Ahmed
As part of its mission to create a pool of ‘Green Teachers’ in the State to give a thrust to conservation efforts, Aaranyak organised a day-long environment education orientation programme for school...