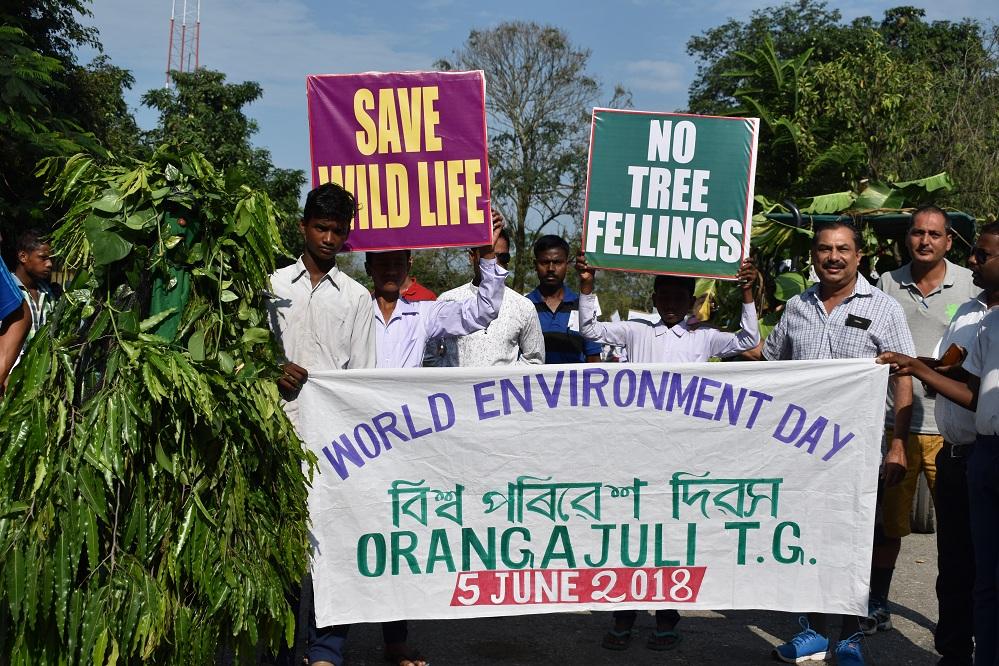 The World Environment Day was celebrated by the Orangajuli Tea Garden management a unit of Goodricke Group Limited in co-ordination with All Adivasi Students' Association Of Assam (AASAA) and All Assam Tea Tribes Student Association (ATTSA) in a befitting manner on factory campus at Orangajuli in Udalguri on Tuesday. The programme began with an awareness rally taken out by students of Orangajuli Tea Garden L.P school where students holding placards urged the ban on plastic and save earth. A man dressed as tree joining the rally caught everyone's attention.

The Deputy Manager of Orangajuli Tea Garden, Talat Ahmed inaugurated the rally.In his speech he dwelt about the importance of protecting our environment and nature. He drew the attention of the audience to the threats of global warming. He emphasized upon sustainable use of these precious resources ensuring environmental protection and nature conservation. He called upon every family to plant medicinal plants like neem in every households and promote plantation in an organised manner. He also exhorted the students to engage passionately in tree plantation and protection of environment.

7 Jul 2016 - 1:28pm | AT News
A record rainfall in Guwahati wrecked no less havoc in the premier north eastern city heavily disrupting Eid celebration by the Muslim people on Thursday. The two and a half hour long heavy downpour...

25 Dec 2013 - 8:04am | Nababuddin Ahmed
3rd Inter-District Rowing Championship will be flagged off at 7A.M. December 25 in Dighalipukhuri, Guwahati. It will be hosted by the Guwahati Rowing Association under the aegis of Assam Boat Racing...