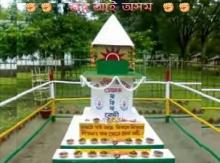 27 Jul 2016 - 2:53pm | AT News
The United Liberation Front of Asom (I) has warned of an outbreak of religious tension in Assam in near future. In a statement issued to media on Wednesday, the chief of the proscribed outfit...

18 Mar 2014 - 3:14pm | AT News
Thousands of people hit the streets in Tezpur on Tuesday alleging failure to arrest the Chauldhuwa culprits who mowed down 15 villagers in January end.With banners and festoons over one thousands of...