15 Mar 2012 - 2:40pm | editor
There seems to be no trace of Dr MC Agarwalla two days after miscreants kidnapped the doctor from his residence in Guwahati. Security forces engaged in the search operation on Wednesday have... 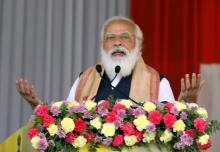 Modi doles out land pattas to 1 lakh families of Assam

23 Jan 2021 - 10:11pm | AT News
Prime Minister Narendra Modi has, on Saturday, doled out land pattas to the 1 lakh families of the indigenous people of Assam. Addressing a massive rally at the historic Jerenga Pathar, the Prime...