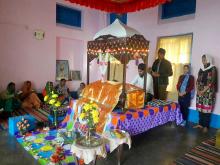 6 Jan 2018 - 12:13pm | Shajid Khan
UDALGURI: The Sikh community of Udalguri and Darrang celebrated the 350th birth anniversary of Sri Guru Gobind Singh with religious fervour at Tangla in Udalguri on Friday. They celebrated the...