25 Feb 2014 - 10:06am | AT News
Bandhs and road blockades seem to have greeted Rahul Gandhi on his two days visit to Assam from Tuesday.Several organizations have enforced bandhs across the state raising their long standing demands... 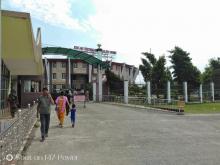 9 Aug 2020 - 7:17am | AT Kokrajhar Bureau
KOKRAJHAR: Amidst the ongoing Governor's Rule in Bodoland Territorial Council (BTC), 29 employees of Transport department have been terminated on Friday(7th August, 2020) from their jobs by BTC...