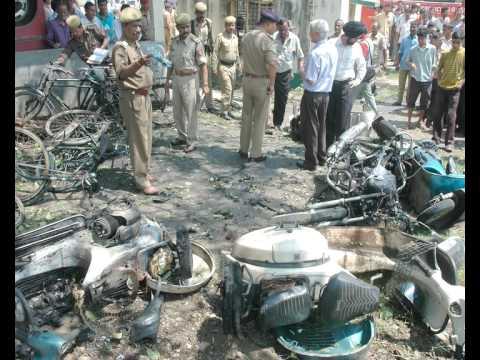 With deep grief and anger hundreds of people in Guwahati thronged Ganesguri the victims of the October 30 serial blast in 2008.

All they lit up many earthen lamps in memory of those left killed in the deadliest blast there apart from Panbazar and CJM Court premises.

“Still I remember the nightmare when the bomb exploded beneath the flyover as I was going to Hengrabari. The moment the explosion took place with a huge sound I noticed the smoke bellowing from the spot.

The commotion, cries and agony of those left half dead. Beyond that I can't explain right now,” said Bisheswar Das who was one of the eye witnesses.

Devika Das, a resident of Ganeshguri started shedding tears as she talked to Assam Time on the deadly incident. “ The entire area rattled under the impact of the explosion. I could not muster the courage to rush to the spot.

“My heart started bleeding as I saw the charred bodies lying here and there. The injured were crying for help.”

Tarulata Das is still angry. The sexegenerian Guwahati resident who survived the incident rued,”where is the perpetrators? Did the law put these culprits behind the bars? We need to know. Compensation alone will not heal the winds.”

In search of a girl in Mumbai

12 Jun 2015 - 12:19pm | AT News
A team of Assam Police has been camping in Mumbai for the last couple of weeks in search of a 16-year-old girl who has been remaining untraced for the last 10 months. But the clue eludes tie and...

21 May 2014 - 9:14am | AT News
At least nine people were killed and five others sustained serious injury when a truck collided its head on a winger in Goalpara district on Wednesday. The tragic mishap took place at Dhupdhara at 5....