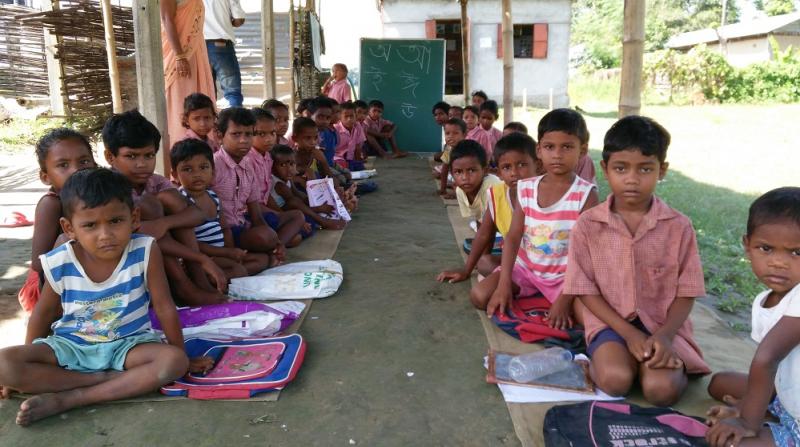 Even though the state government is busy organizing Gunotsav to enhance the quality of education and restore the lost glory of government run schools by improving in learning level of students at Elementary level the sorry state of affairs of some schools which lacks basic infrastructure and in turn this schools participating in much hyped Gunotsav is an irony in itself.

The Bholakash Lower Primary government school in Khokhagaon village of Udalguri district is a standing example,which reflect a picture of neglect on the part of the government as the school lack basic infrastructural necessity of school building and even adequate number of desk-benches. The Bholakash L.P school established way back in 1990 located on the bank of Bhola river in remote Khokagaon village under Udalguri Education Block was provincialized in 2013 but the school is yet to get a concrete school building.

The students from primary section to class 3 are taught in a dilapidated house constructed with bamboo where the students carry plastic mats and sacks due to lack of desk-benches, moreover the students of Class 4 and 5 are taught in kitchen room. The toilet room constructed by the government is used by the school authorities as godown to store cereals. The studies are also suffering due to lack of teaching staff as only a single teacher acting as one army is teaching 40 students.

Ironically,the school organized Gunotsav in such state on Wednesday . The flower garden of the school was also allegedly built within a night. Will such schools receive Government attention after Gunotsav, is a million dollar question?

13 Jul 2014 - 8:54pm | AT News
DoNER minister VK Singh said that knowledge is a key resource for achieving economic growth and social development. In his address at the IIT-Guwahati convocation ceremony on Sunday, the former army...

27 May 2012 - 1:02pm | Daya Nath Singh
Citizens’ First , an NGO has demanded the land vacated by shifting of Guwahati Central Jail from Fancy Bazaar area of the city to be converted into a freedom fighters’ park with green...