In a historic move, the Assam government on Friday moved s bill in the legislative assembly to ensure proper care for the elders.

Moving the Bill on the floor senior minister Himanta Biswa Sarma said the bill if turned into an Act would make it mandatory for all government employees to ensure proper care for their parents.

“The government would not tolerate negligence to the parents of an employees. A govt employee will have to face action “ said Sarma.

Assam is the first state to have moved such bill aiming at enduring care for the elders.

15 Mar 2015 - 8:39am | AT News
BJP has announced its first list of candidates for ten constituencies for the ensuing election to the Bodoland Territorial Council scheduled for April first week.BJP Assam state general secretary... 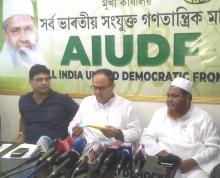