Finally, the criminal investigation department probing the multi crore Louis Berger kick back scam have submitted its progress before the court triggering the speculation of yet another political storm.

The state investigation agency on Thursday submitted the report at a sealed enveloped a couple of months after it was left red faced for inability to file a comprehensive progress report.

Hearing a public interest litigation a few months back, the court asked for a progress report from CID which the agency failed to do. On Thursday,CID filed the report.

The scam took place during the erstwhile Congress government where the Jerasy based company had to bribe a powerful circle in Dispur to ensure the award of contract of a multi crore water supply project in the capital city of Guwahati.

Swine flu toll goes up to 4

15 Mar 2015 - 11:58pm | AT News
The killer wine flu has claimed two more lives in the state creating panic among the people these days.The reports of fresh deaths came from Jorhat district where two other people have been... 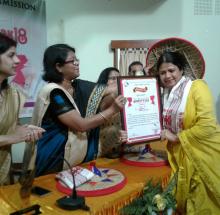 31 Mar 2008 - 3:46pm | editor
Four people of a same family died in Sivasagar district when they consumed mushroom on Saturday. According to information, the incident took place at Jiamari Palengi gaon in Demow near Rajmai. They...